In the Spotlight: An interview with Paul Maley, Global Head of Securities Services, Deutsche Bank 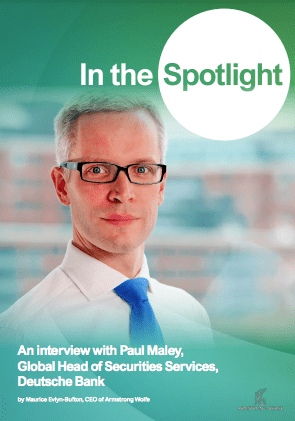 Being a COO is a stepping stone to a successful career

I met Paul in 2015 when he was global head of Deutsche Bank’s Business Solutions Group (BSG). Already into his second decade at the bank, it was a career which had taken him from London to Frankfurt to New York, back to London, New York once again and finally back again to London to take on a new role focused on transformation.

“22 years with one employer, that’s no mean feat in modern times” I suggested to Paul, as longevity is not frequent in an era when a job for life is an adage from a bygone age. “I suppose it is not common practice” Paul added, mentioning the many personnel changes he had witnessed in the years he had worked with Deutsche Bank, where many of his former colleagues are now spread across the industry. “I have been lucky as the bank has consistently presented me with opportunities on a two to threeyear cycle, and each opportunity has been something new, something that would stretch and entertain me.” This sounded remarkably good career management by Deutsche Bank. Whilst this may have not been a pre-planned career management process, however, it was clear Paul had sponsors and managers at pivotal points [in his career] to enable him to progress. Selfeffacingly he added “I had a remarkably small amount of influence on what my next role would be.” This statement would need further questioning.

I am a firm believer you can make one’s own luck. I know many that have done so, but don’t admit to it or perhaps haven’t recognised they have done so, unconsciously relying on their skills, abilities and perseverance to capitalise on opportunity, rather than relying solely on luck itself. It is also fair to say a truly good businessperson knows how to make their own luck; a quality needed in the competitive environment of banking, where you cannot just wait around for success to fall into your lap. Therefore, Paul would need to have been at the right place, at the right time, with the right level of sponsorship with a rightful opportunity available seven times in his Deutsche Bank career to have arrived where he was today. Eight career moves engineered by others that he was happy to go along with. Perhaps once or twice I thought, but eight times? That would suggest someone making their own luck by their performance and being adept at shaping the narrative of their manager as to what might be a good next step for them. Paul’s humbleness is one of his characteristics anyone can warm to. It differentiates him from many and to this end I decided not to push hard on this point, but needless to say my view is that this journey may not have been as hands-off and opportunist as Paul may think or admit.

In 2009 luck came from some colleagues’ misfortunes, a turn of events that took Paul to his first COO role. Beforehand, his career had seen him working in the fixed income and equities businesses, as a trading assistant, sales analyst or within business management. The global equities leadership team had been collateral damage of the 2008 crash, which manifested itself in that team being let go and a comparatively inexperienced management team being given the reins to run the equity derivatives business in their stead. Within this Paul was offered the Global COO, Equity Derivatives role, which he accepted enthusiastically.

“I had a pretty good understanding of the role of the COO from years working in the business. This was in an era when the COO was not as burdened by regulation or the same demands of realising cost savings and efficiencies. The COO was an empowered and commercial role, a true partner to the business head tasked on forward thinking, dynamic tasks. Compared to certain aspects of my previous roles or others I had witnessed, which carried varying degrees of repetitiveness, the COO was an entrepreneurial, ever changing role and offered exposure to senior management (across the bank)”.

It was appropriate to reference the 2006 Harvard business paper, Second in Command: The Misunderstood Role of the Chief Operating Officer (Nathan Bennett and Stephen A. Miles), its title the essence of the COO role outlined by Paul. An essay we were both aware of and one that was perfectly aligned to his first COO mandate.

In 2010 Paul was promoted to Managing Director, at 33 he was ahead of the average¸ in part due to his success in the COO role. The next move took him back to New York and his first senior P&L role as the regional head of Listed Derivatives. “What did you take into your new role from being a COO?” I was interested to know. “Any COO role is a multitude of tasks, ever changing priorities and demands and a need to lead but also influence people. I had become disciplined in my time management, developed a strong project capability, and truly understood the multi-faceted nature of the bank from front to back. Without doubt I was more effective as a business head because I had been a COO”.

It is not surprising that his return to London in 2014 was to lead to a role charged with driving and delivering change across the firm. “This was similar to a COO role, being embedded in business management but as it wasn’t aligned with any one business it had breadth and visibility across the bank.” This role was eventually quite short-lived, as Business Solutions Group (BSG) was a casualty of an organisational restructuring programme.

The landscape of opportunities was limited and competitive and here Paul admits he targeted and lobbied for one role, which he secured when he was appointed Global COO of Institutional Sales. “I wanted to move back into a COO role and importantly, as the sales mandate was across the business and multiproduct, this would be more interesting and give me far more exposure to clients.”

It was interesting to hear how the COO role had changed in the six years since he left his first COO position, when he was the business manager for equity derivatives. “Quite dramatically” Paul affirmed “It had morphed into a role that was tasked to absorb and adapt to the market and the new controls structures. The outward, forward looking strategic mandate had been replaced by a directive where the COO did three things (1) asset allocation (2) level 1 controls (3) strategy within its operating environment (market structure)” he paused “but this is what a COO must do, adapt and change to the needs of the business at the time. In both COO roles I have been given they held equal importance to the success of the business, even if one was more commercial than the other”.

We drew the conversation to a close in discussing his most recent moves. His seventh was one back to owning a regional P&L, as the UK and Ireland Head of Corporate Banking. This was comparatively short – lived as in late January 2021 Global Custodian magazine reported on Paul’s eighth upward step in 22 years at Deutsche Bank following his additional role announcement as Global Head of Securities Services. Both represent a new area for me in running businesses and therefore some could argue a leap of faith, but in many ways, I see my career and especially my COO experiences as being an apprenticeship for this challenge.”

“Was there anything specific you can point to that supports your thoughts?” I asked. “As a COO every day you think deeply about the business from a front to back perspective, with a focus on controls and conduct and in my particular case, I had dedicated time to understanding the role and importance of technology and innovation in taking the business forward. All these are important competencies to have as a business head today.”

This reminded me of another conversation I had held recently with the Head of Markets at a different firm. He had commented on the converging responsibilities of the CEO and COO and how the skillsets of proven COOs in managing non-financial risk, understanding the possibilities of technology and in leadership would inevitably change the importance and the impact a COO can have. Additionally, he talked about how this position (similar to COOs outside Financial Services) should be mandated to drive the business in the future. In this context, Paul’s accidental and apparently little managed career had bought him to a point in the industry’s evolution where his exact skillsets and experiences were perfectly aligned to lead a business. Just another coincidence, a smattering of good luck or perhaps the making of this good fortune had a little to do with Paul’s ability to seize the opportunity when presented, and use his success in each position to be a springboard to the next and educate himself on route.

There is little doubt Paul’s time spent as a COO has been invaluable in advancing his career, an early career move into business management that has paid dividends. It reminded me of something Paul told me in 2016, when head of BSG, while discussing his desire to take people from outside the norm into his function and into business management. “As a COO every day you think deeply about the business from a front to back perspective, with a focus on controls and conduct and in my particular case, I had dedicated time to understanding the role and importance of technology and innovation in taking the business forward. All these are important competencies to have as a business head today. Adding to direct exposure to clients, it helps a lot in any new business position to best align client demand and the firms evolving value proposition” This remains sound and relevant advice to anybody considering an early move into business management today as it did back then. 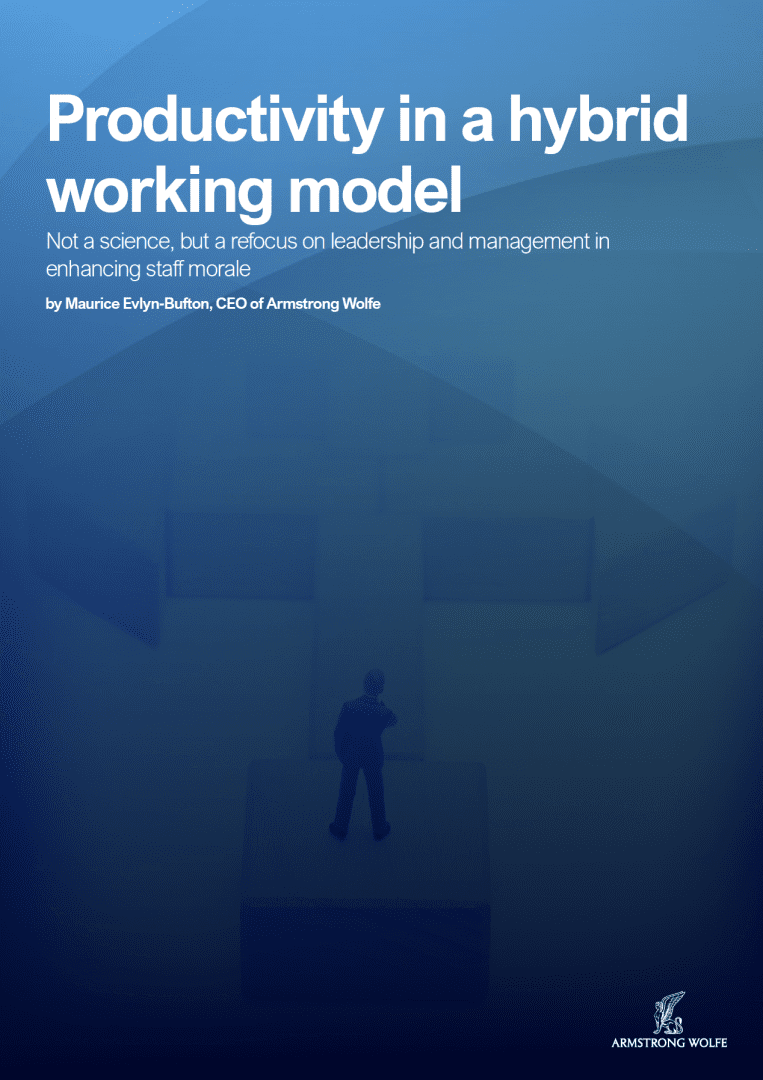 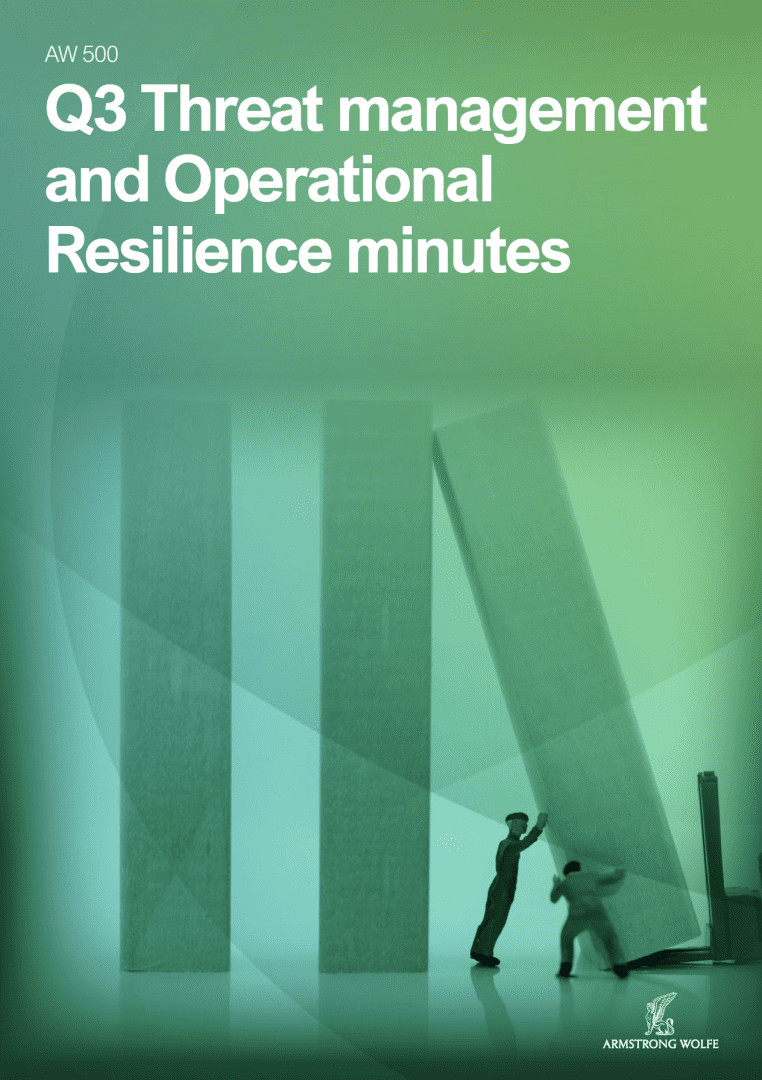 Abridged Minutes Today Non-Financial Risk (‘NFR’) is managed within silos, with no single point of data aggregation existing to provide holistic oversight that would support decision making (in relation to NFR). It is recognized: -Data is the lifeblood for effective... 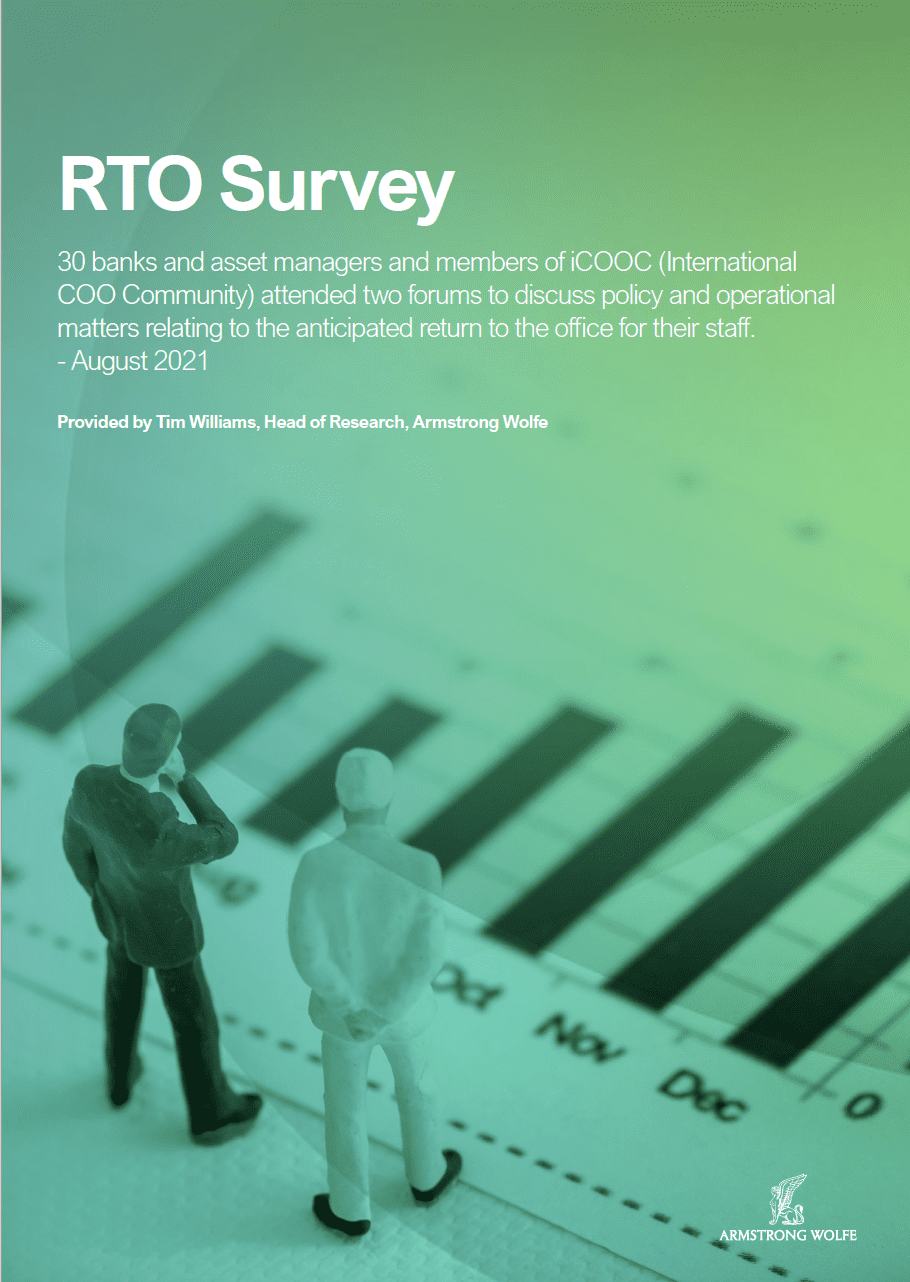 RTO Survey 30 banks and asset managers and members of iCOOC (International COO Community) attended two forums to discuss policy and operational matters relating to the anticipated return to the office for their staff. - August 2021 Provided by Tim Williams, Head of... 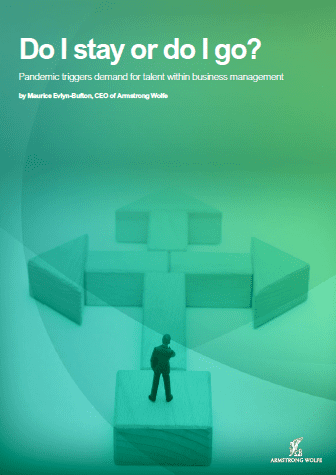 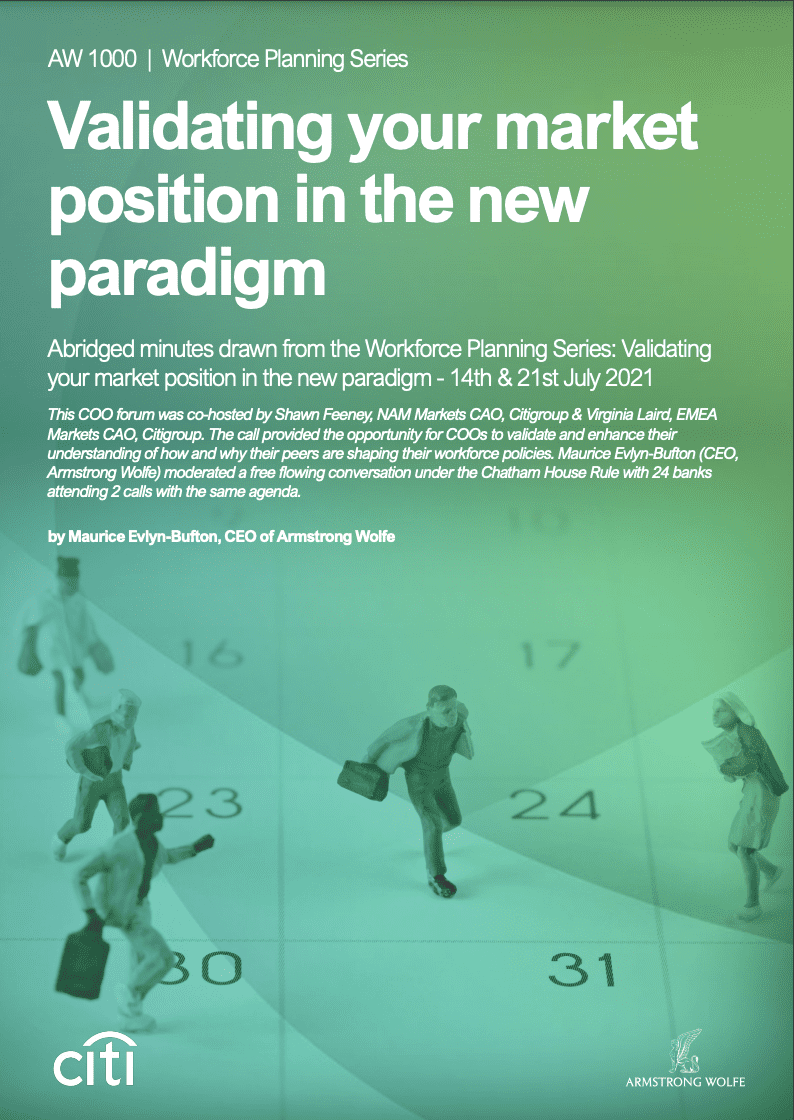 Validating your market position in the new paradigm