Why menopause matters, especially in the workplace

By Alison Martin-Campbell, Executive Assistant and founder of EY’s 40+Network

I nodded as I listened to the recent Women in the COO Community podcast episode, featuring Lauren Chiren, CEO of Women of a Certain Stage, on ‘Why Being Menopause Supportive is Business Savvy’. Many of her comments and observations resonated, and also reminded me of conversations I’ve had with my colleagues.

My own personal experience of menopause, and subsequent feelings of isolation, led me to set up EY’s 40+ Network four years ago, an employee forum to support colleagues, aged 40 and above, lead the best lives they can. Menopause and its associated symptoms, such as hot flushes, insomnia, brain fog and depression, and lesser known ones, such as hair loss, itching, tingling extremities, incontinence, and vaginal atrophy, are rarely discussed in the workplace, despite the debilitating impact they can have. They are not easy things to talk about, especially at work, for fear of embarrassment, discrimination, or being side-lined.

A 2019 survey from Bupa and the Chartered Institute of Personnel and Development found that 59% of working women aged 45 to 55 who were experiencing the menopause reported that it had a negative impact on them at work, with the most common issues including a reduced ability to concentrate, and feeling more stressed and less patient with clients and colleagues. The same survey estimated that 900,000 women had so far left their jobs, due to menopausal symptoms.

I felt so alone and isolated by peri-menopause symptoms. I was suffering from repetitive cystitis and ended up in hospital. I was told at 47 I was too young to be menopausal by a registrar, and so I struggled on for another year, with numerous hospital referrals and further tests but got nowhere. At this point, I had lost faith in the medical profession and was searching the internet for my symptoms when I found the Menopause Matters website and discovered I had vaginal atrophy. I was given treatment by my GP and also made some lifestyle changes that meant I was able to manage my condition and my quality of life improved dramatically.

The brain fog I suffered was all-consuming. I couldn’t remember things and so I kept copious notes of what was helping me manage my symptoms. Those notes would soon be shared with several colleagues, who were also experiencing symptoms, but didn’t know what to do about them. I was also being contacted by people I didn’t know, who wanted help and information, which made it clear to me that there were more women like me, who needed help but unsure how to get it.

With the support of EY’s Diversity & Inclusion team, I set up an employee network to share knowledge, advice and support, relating to middle age in particular around health and ageing in the workplace.

The network has since grown and we now have 240 members, based across the UK. We proudly host events where women can have open and honest conversations about the menopause, for example on how we can break down some of the stigmas around the menopause in the workplace. We are also raising awareness that menopause is a societal issue, not a ‘women’s issue’. Every woman will go through menopause and she should be able to discuss this issue freely and without embarrassment or shame. Now if colleagues approach me for advice, I suggest they make another appointment with their surgery’s menopause or gynaecological specialist, or to try another doctor and if possible, go privately with a menopause specialist.

Support in the workplace

Giving support to employees so they can continue to work at this particularly challenging time in their lives makes sense economically as well as personally for individuals. According to a Department of Education Report, there are more women in the UK labour market than ever before and numbers of women over the age of 50 working has increased in recent years. The current UK retirement age for women is  67 which means that, if the average woman starts menopause at 51 – while not all women’s symptoms last for years – it could some women could spend between a quarter to a third of their working lives experiencing debilitating menopause symptoms.

So how can employers provide support? On a practical level, there are a number of things that can make a huge difference. Making desk fans available, for example, or providing access to a well-ventilated room to recover from a hot flush. None of these initiatives are expensive or difficult to implement but can be really helpful.

Providing options for employees to work flexibly, can make a huge difference too. When I was really struggling with insomnia, flushes and cystitis, I found it difficult to stand on my commute. But, after talking to my line manager, I changed my hours to avoid rush hour. This small change had a huge impact on my life and relieved a lot of the anxiety I was feeling about my journey. EY’s long-standing flexible working policy, which was implemented well before the COVID-19 pandemic allows for home working or flexing hours, which many peri-menopausal and menopausal colleagues have found helpful. This approach not only benefits the individual but also the firm: less days are lost to sickness and can lead to better productivity and output.

Some companies have formalised some of these initiatives into specific menopause policies, covering issues such as the provision of desk fans, occupational health support, flexible working and a counselling service. But, there isn’t always a need for businesses to implement a specific policy for supporting women experiencing the menopause. Open conversation and the right adjustments can be just as powerful.

Providing forums for discussion can also be really important. Giving employees the opportunity to set up a network can be a great way of harnessing collective power, cultivating those important conversations and driving internal cultural change and removing unconscious bias around menopause.

Communication and education can help to challenge perceptions and misunderstandings of the menopause and prompt more open discussion about it. This can include taking steps to provide an open environment for women to feel they can discuss their experience of the menopause and the impact their symptoms are having on their day-to-day working lives. For example, the issue can be woven into other topics such as sleep, nutrition, and exercise to help encourage people to view it with the same importance as a number of other health considerations.

Lynn Rattigan, EY’s Chief Operating Officer in the UK & Ireland, says: “At EY, we’ve identified a number of ways that we can provide support to help our employees navigate the menopause and surrounding issues. And, as a result, we’ve been able to retain and attract a far more diverse workforce.”

Breaking down the stigma

More still needs to be done around the stigma of menopause and now the Government is taking action, as well as employers. In July, the House of Commons Women and Equalities Committee launched an inquiry into menopause and the workplace. “Despite the fact that hundreds of thousands of women in the UK are currently going through the menopause – a process that can be both physically and mentally draining – it is ignored in legislation. It is time to uncover and address this huge issue, which has been left near-invisible for far too long,” said the committee’s chair, Caroline Nokes MP.

From my own perspective, as well as giving presentations on menopause, I have written in newspapers and contributed to a book called Still Hot on the subject. Countless women have thanked me for my openness and honesty about my own experiences which has led them to speak more openly and enabled them to go down a successful path of treatment or lifestyle changes.

Many women feel shock and unprepared for menopause. Maybe because of all the negative connotations around this time – the end of fertility and the feeling of passing youth – it’s something many of us don’t wish to address. But forewarned is fore-armed! If I had known that my symptoms a few years ago were peri-menopausal, I would not have suffered for over two years before seeking medical help.

I would love it if not only men, but also younger women could become allies to menopausal women and feel comfortable giving support and using menopausal language where appropriate so that it becomes a normalised topic of conversation with no shame or embarrassment attached.

I think UK society has come a long way in the last five years with regards to openness about menopause, with a number of celebrities like Meg Matthews and Davina McCall speaking honestly about their own personal experiences. I sincerely hope that in the near future, it will get even better with more employers either having policies in place to both support women going through menopause and their colleagues who manage or interact with them. It feels like we are at a tipping point.

While initially feeling sad about my passing years, I came to the conclusion that I wanted to make the most of what time I have left and to live as well and as comfortably – physically and emotionally – as I possibly could. And as part of that journey I have been on, I felt empowered to move forward with the 40+ Network which has in turn helped me support so many colleagues to live better, more comfortable and less (in some cases) stressful and distressing lives. I want women – and their families – to know that there is light at the end of the tunnel when it comes to menopause. 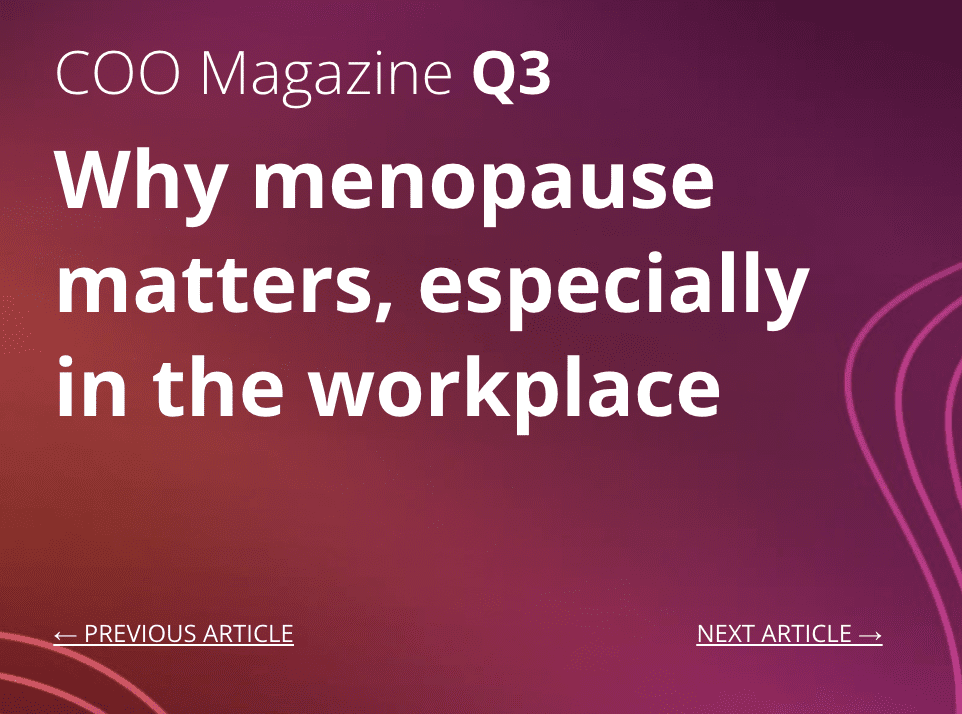 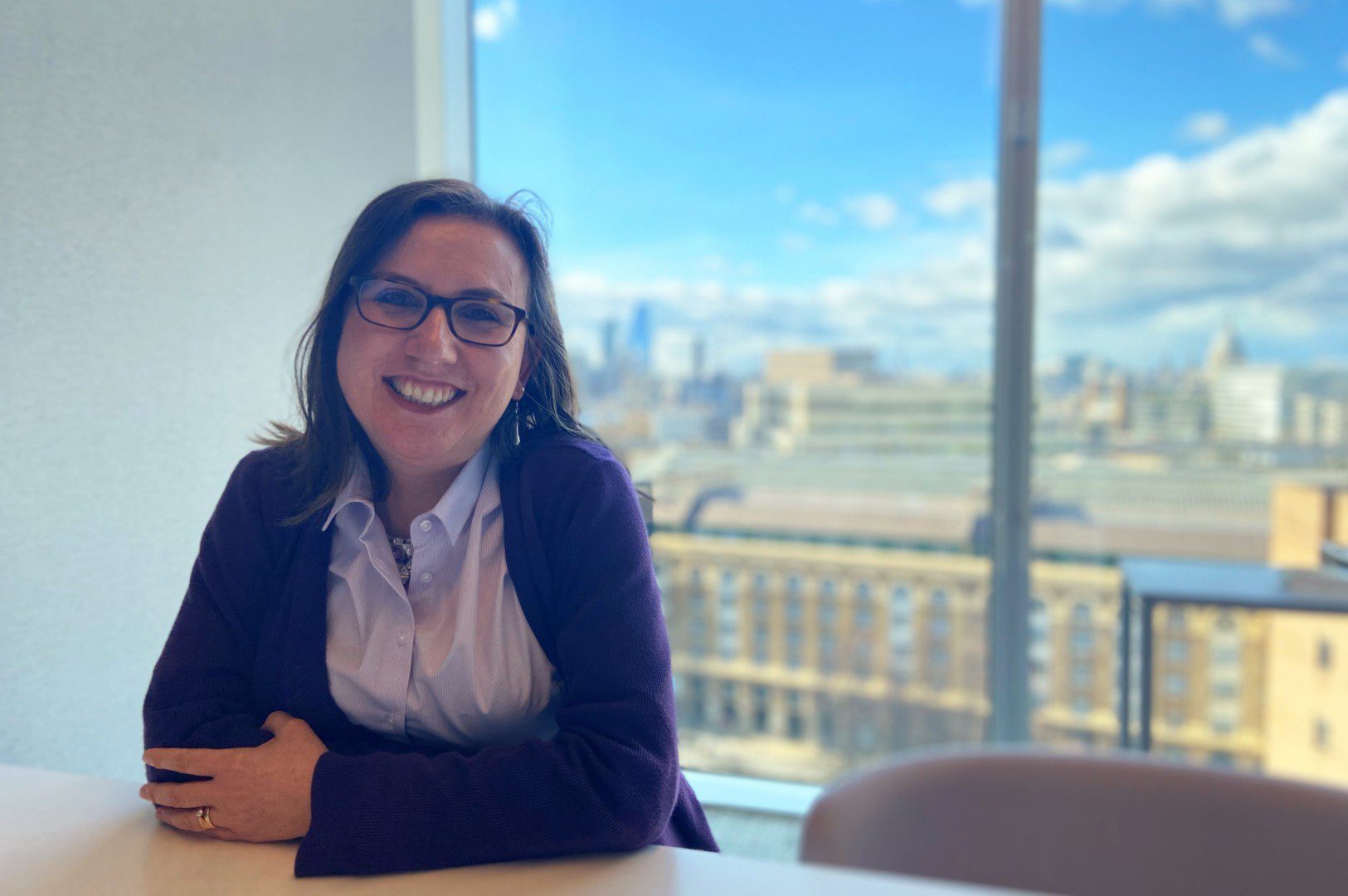